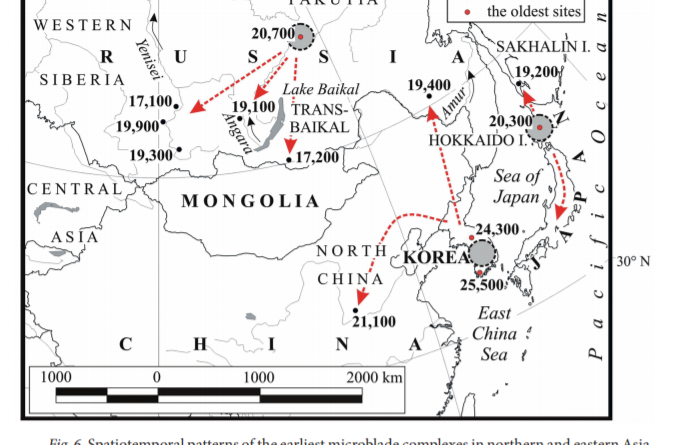 A recent paper provides an important update and overarching theory of the origins of microblade technology in Eurasia and where the core areas of the technology might have been. This paper goes further than previous ones in suggesting that the earliest origin of the technology most likely is Korea, which displaces an earlier held view that microblade technology of Japan, for example, came from the Altai or Southern Siberia. Read the authors’ discussion of the “single origin scenario” vs the independent “multiple origin scenario” from excerpts from the paper which follow on below:

Microblade technology is one of the most remarkable phenomena in the Upper Paleolithic of northern Eurasia, primarily the northern and eastern regions of Asia. Here we present an overview of the most recent developments in attempting to understand the emergence and spread of this technology, based on data known for Siberia and the Russian Far East, Mongolia, China, Korea, and Japan. The main assumptions for selection of the earliest microblade complexes are:

2) a reliable chronology based on critical evaluation of radiocarbon dates; and

3) the stratigraphic integrity of artifacts. The pressure flaking was a technique to make microblades, and this is important issue which was often not taken into account previously. Based on these criteria, the oldest microblade-bearing complexes for each of the regions listed above were selected. Using these data, we can conclude that the earliest evidence of microblade technology is known from the Korean Peninsula where it is dated to ca. 25,500–24,200 BP. In other regions (China, Siberia, Russian Far East and Japan), the first microblade assemblages are dated to ca. 21,100–19,400 BP.

As a result of our analysis, two possible explanations for the emergence of microblade technology in northern and eastern Asia can be considered:

1) invention and diffusion from a single core area; and

2) independent creation in several places and subsequent expansion. Currently, we cannot solve this issue, but generate some suggestions which may bring us closer toward identifying its origin and spread.
Factual data as presented in this paper can be used as a primary source for future research

After a critical review of the earliest microblade complexes in northern and eastern Asia, it seems clear that we cannot solve the issue of the appearance of microblade technology, but only come closer toward identifying its origin and spread. It is certain that there are strengths and weaknesses for each of the major scenarios for the emergence of the regional microblade assemblages.
In some cases, migration may explain the occurrence of microblades at sites dated after the initial or oldest finds in Korea. Thus, a “single origin scenario” would reflect the spatiotemporal patterns of the spread of the technology. However, there are large geographic gaps where no microblade sites have been reported. This prevents us from creating a more detailed picture of microblade origin(s). Alternatively, a “multiple origin scenario” could be the mechanism responsible for the emergence of microblade technology at ca25,500 BP and later, at ca. 24,300–20,300 BP. The inhabitants of the earliest microblade sites, i. e. in Korea, may have invented the technology independently. A major problem in resolving this is the lack of any microblade-containing localities between the earliest ‘core areas’ in the geographically distant regions (Fig. 6).
The continuation of research in the northern and eastern regions of Asia will bring new knowledge on the Upper Paleolithic allowing a more detailed examination of the issue. The selection of sites presented in this paper (see Table 1) can be used as a basic source for future research.

… northern and eastern Asia, we suggest two possible scenarios for the emergence of microblade technology:

1) invention and diffusion from a single core area; and

2) independent creation in several places and expansion from them.

The early dates from Korea and the later ages for other early microblade technology sites (in Siberia, the Russian Far East, China and Japan) suggest that an origin of this technology in the northeast Asian region may point to a single ‘core area’ (i. e., Korea). The increasing regularity (standardization) and higher lithic numbers at the later sites would appear to support this scenario, that is, progressive sophistication of knapping technology to manufacture increasingly more refined and numerous specimens. Several scholars are in favor of a single core area, with the Altai Mountains as the place of origin for microblade technology105.
In northern and eastern Asia, pressure flaking may have its origin in regions where narrow-faced core technology developed, and these are Siberia, Mongolia, Korea, and Japan106. Tortsovy cores (i. e., a kind of narrow-faced core) have not been identified in China. It therefore seems possible that microblade technology was invented in several places.
We can provisionally suggest at least three centers of origin: Korea, Yakutia (as part of Siberia), and Hokkaido (Fig. 6).
At least one of these centers (most probably, Korea) may be responsible for the appearance of microblade technology in North China. This is supported by the non-existence of blades in North China before the emergence of microblades107. The proposed early presence of blade technology at the Shuidonggou 1 and 2 sites at ca. 36,300–29,800 BP108 requires further chronological research because the current evidence for this age is questionable109.
For the mainland Russian Far East with the oldest microblade assemblage dated to ca. 19,400 BP, it is plausible to suggest that the Korean ‘center’ was responsible for the appearance of microblade technology in the Amur River basin (Ust’-Ul’ma 1 site; see Fig. 6)
because contacts existed in the Upper Paleolithic between Korea and the Russian Far East as testified by the exchange of obsidian110.
The Siberian region of Yakutia with its relatively old microblade assemblage at the Khayrgas site (dated to ca. 20,700 BP) could have served as a core area for the southern Siberian regions of Transbaikal, and the Angara and Yenisei River basins (Fig. 6).

The ca. 20,700 BP old microblade technology at the Kashiwadai 1 site on Hokkaido is older than the microblade assemblages from Honshu Island (ca. 14,250 BP) and Kyushu Island (ca. 16,000 BP)111. The Kashiwadai 1 wedge-shaped cores and microblades are very standardized and advanced. For Sakhalin Island (Ogonki 5 site), Hokkaido is the most probable source area for the introduction of microblade technology (Fig. 6). The exchange of raw material (obsidian) is known to have existed between these regions since ca. 19,200 BP112.
The proposal that microblade technology was introduced to Hokkaido from the Altai and possibly Transbaikal via Mongolia, and to Transbaikal from Hokkaido via Sakhalin and the Russian Far East113, ignores the evidence from the Korean Peninsula. It can also not account for the lack of sites between Hokkaido and Mongolia because of the absence of microblade complexes south of Hokkaido within the Japanese archipelago (Kyushu and Honshu islands) where around 13,670 Paleolithic sites are known114. There is also no reliable evidence for human migration from Hokkaido Island to the Transbaikal via Sakhalin Island and mainland Russian Far East115

In the paper, the authors also dispute these previously held views of other authors:

“With regard to misinterpretations and misrepresentations of our views in terms of the age and origin of microblade technology, three recent cases deserve attention.

O.BarYosef116 states that “…the early pottery examples from Japan and from eastern Siberia are found in the context of microblade industries, the origin of which is currently attributed to northern China”, with reference to our volume117. However, this book118 does not contain any information about northern China as the place for the origin of microblade complexes, and Bar-Yosef ’s opinion is a plain misrepresentation119.
It is stated that “…the Lake Baikal region of Siberia was the cradle of microblade technology…”120, citing our work121…”