Shell mounds are basically ancient kitchen dumps but they are sexy icons for the whole field of Japanese archaeology. The excavation of the Omori shell mounds by Edward S. Morse in 1877 is associated with the dawn of scientific archaeology and anthropology in Japan; at the same time, the birth of the University of Tokyo regarded as having been launched with the publication of the report on the shell mounds as the very first volume of the Memoirs of Science Department, University of Tokyo.

Jomon villagers would process the shellfish and deposit the shells at a shell midden site between the riverside and their dwellings. After eating the shellfish, the empty shells would be deposited in a dumping site in a location away from the village as can be seen in the left foreground of the replica village below. This was probably so as to avoid stench as well as attracting predators such as wolves and other wild animals to their dwelling grounds.

Research on the Nishigahara shell mound was featured as an exhibit this month at the Tokyo Metropolitan Archaeological Center adjacent to the Jomon Village Historic Garden.

The research reveals that the Jomon people collected shellfish mostly during the spring to summer seasons.

How were scientists able to know when the shells were collected? 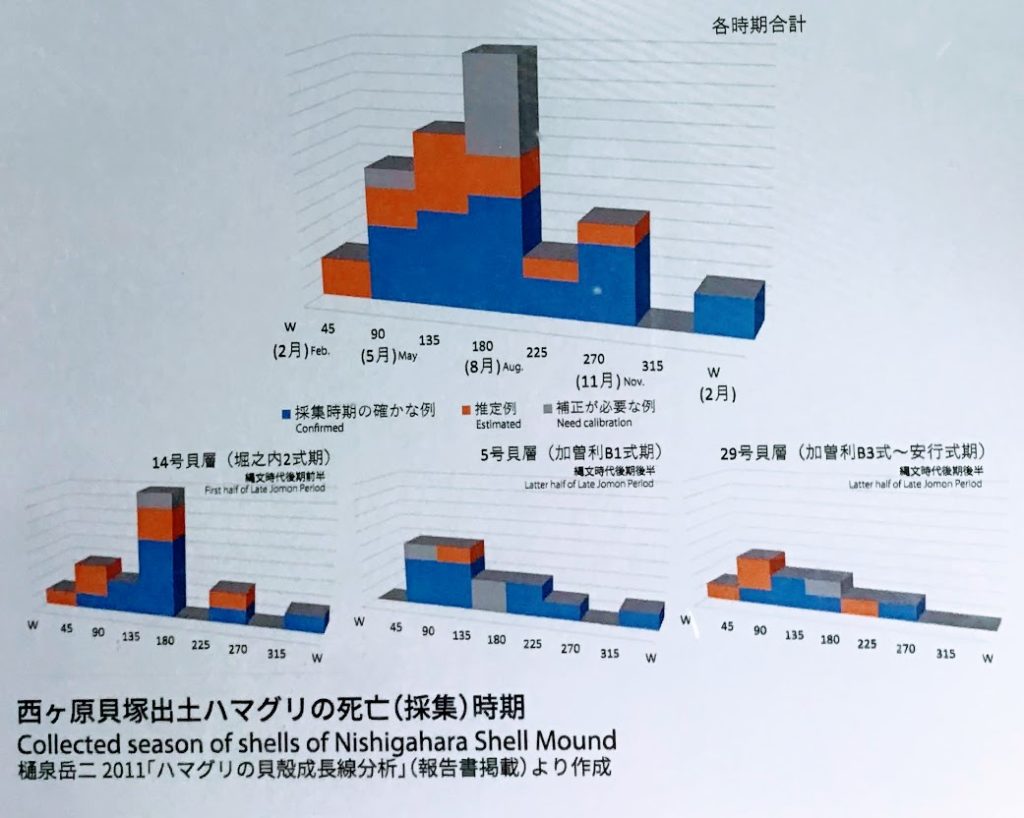 By studying the intervals and widths of the growth lines of outer shell layers of the shells found in the shell mound over time, researchers were able to determine that the shellfish were gathered mostly during the spring to summer period.

Elsewhere in the city of Toyohashi, Aichi prefecture, Japan Times reported (Jan 22, 2018) the findings by an excavation team that investigated the ancient heap of shells at Sakatsuji Shell Midden from the latter half of the mid-Jomon Period:

“The volume of shells discovered was so huge it is hard to believe that they were consumed within the region, and the excavation team has said there is a possibility people dried the clams after they were boiled so that they would last longer and could be used for trading.”

According to the report, the Sakatsuji midden was observed to possess features similar as other six shell mounds in Muro dating from 2,300 to 3,800 years ago (the late Jomon Period). The team also discovered 55 objects that looked like furnaces assembled from stones, and a member of the excavation team proposed that the placing of earthen pottery directly on the ground and that the simpler furnaces without stone structures were designed to cope with a large demand and volume of clams to be processed,

“We believe that the clams were boiled in the furnaces, and their meat stripped from the shells. Afterward the shells were piled up, then the ground was leveled and made into a processing site again,” said a member of the excavation team. “That kind of process must have been repeated again and again.”

The team conjectured that the Sakatsuji discovery, together with the other Muro finds, possibly indicated a center that serviced large scale clam processing and production, possibly for trading and distribution to other regions. This view was received with caution by academia, saying that further investigation of the site and analysis of the stones were necessary to determine whether they were furnaces for boiling clams.

Much research and recent literature have been produced on the Jomon use of aquatic resources, read my earlier post for insights from the Maedakochi site, The earliest Jomon developed and used pottery for fishing salmon and molluscs 15,500 years ago

All rights reserved. Text and photos of exhibits by Heritage of Japan.

The earliest Jomon developed and used pottery for fishing salmon and molluscs 15,500 years ago